whoops, turns out online journals are not immune to my tendency to write three entries and abandon them

i've been baking a lot more since the pandemic hit california. i honestly didn't do any baking at all before aside from the occasional dabble in an overnight no-knead bread. the kitchen-aid stand mixer that andré and i received as a wedding gift has gotten more use in the last couple of months than it has in the almost three years since we received it. i've been baking a lot of sourdough, and have mostly settled on my preferred interpretation of the tartine country loaf. i can finally make some really good chocolate chip cookies. and, most recently, i tried my hand at the english muffins that made a bakery in my hometown famous.

the model bakery is on main st in st. helena, ca, which is the small napa valley town where i grew up. we had acme and bouchon bread in the supermarket, but model was where you went if you wanted some good coffee and a fresh loaf. at some point their english muffins became world famous - they were even on oprah's favorite things list afew years ago - so when i was feeling homesick recently, i decided to try to make some as a way to use up some of my sourdough discard.

fortunately, model published a cookbook back in 2013, and the muffin recipe was one that was promoted on several blogs, including serious eats. i took that recipe and made the slight tweak of replacing first 200g, then 300g of the flour & water with my sourdough discard, which i keep in a jar in the fridge. i still made the biga the night before and i still use yeast. the flavor of these muffins is really incredible. they are light and pillowy and very decadent.

i have been successful doing both the bulk fermentation and the prove overnight, so imo whichever one works better for your schedule will be fine. just make sure you take the shaped dough balls out of the fridge an hour or so before you cook them.

up next, i will probably try out what it would be like to replace the biga with a leaven and/or replace the yeast in the bulk of the dough with natural leaven.

what follows is my adapted recipe, feel free to try it out!

[biga]
at least 1 day before cooking the muffins, combine the flour, water, and yeast in a small bowl to make a sticky dough. cover tightly with plastic wrap and refrigerate for at least 12 hours or up to 24 hours. the biga will rise slightly.

[dough]
combine the biga, water, sourdough discard, yeast, olive oil, and salt in the bowl of a stand mixer. affix the bowl to the mixer and fit with the paddle attachment. mix on low speed until the mixture looks creamy, about 1 minute. mix in 285 g of the flour to make a soft, sticky dough. turn off the mixer, cover the bowl with plastic wrap, and let stand for 20 minutes.

mix in enough of the remaining 75g flour to make a soft dough that barely cleans the mixer bowl. replace the paddle with the dough hook. knead on medium-low speed until the dough is smooth and elastic, 8-10 minutes.

turn out onto a clean work surface. the dough should feel tacky but not stick. shape the dough into a ball. oil a medium bowl. put the dough in the bowl and turn to coat with oil, leaving the dough smooth-side up. cover with plastic wrap.

let stand in a warm place until almost doubled in volume, about 2 hours. (the dough can also be refrigerated for 8 to 12 hours. let stand at room temperature for 1 hour before proceeding to the next step.)

sprinkle cornmeal over the entire surface of a half sheet tray. using a bowl scraper, scrape the dough out of the bowl onto a lightly floured work surface. it will be sticky! working one at a time, cut an 80g piece of dough, shape it into a taut ball, then set it seam side down onto the sheet pan. you can sprinkle more cornmeal on the top or try and flip it to coat, whatever's easier.

loosely cover the pan with plastic wrap. you want to allow room to rise but not so loose that air gets in and the balls form a skin. let stand in a warm place until the rounds have increased in volume by half and a finger pressed into a round leaves an impression for a few seconds before filling up, about 1 hour. if you didn't do a cold bulk fermentation, you could also stick them in the fridge overnight for a cold prove. be sure to take them out an hour before you plan to cook, so they come to room temperature.

[cooking]
to cook the muffins, melt enough ghee to coat the bottom of a large, heavy skillet (preferably cast-iron) over medium heat until melted and hot, but not smoking. in batches, add the dough rounds to the skillet - they will expand quite a bit so leave space between them. cook, adjusting the heat as needed so the muffins brown without scorching, adding more ghee as needed. the undersides should be nicely browned, about 6 minutes. turn and cook until the other sides are browned and the muffins are puffed, about 6 minutes more. transfer to a paper towel–lined half-sheet pan and let cool. (it will be tempting to eat these hot off the griddle, but let them stand for at least 20 minutes to complete the cooking with carry-over heat.) repeat with the remaining muffins, wiping the cornmeal out of the skillet with paper towels and adding more ghee as needed.

to serve, split each muffin in half horizontally with a serrated knife. when they're fresh they don't need toasting, but it can't hurt. keep in an airtight container for as long as you can last without eating them all - i've found that they start to degrade in quality after 2-3 days, even with toasting. serve with butter and jam or as part of a breakfast sandwich.

so as you probably know, jk rowling has ruined her legacy with her persistent commitment to transphobia and general TERFiness. im not gonna link it here but she has been showing her whole entire ass on twitter so you can go look it up 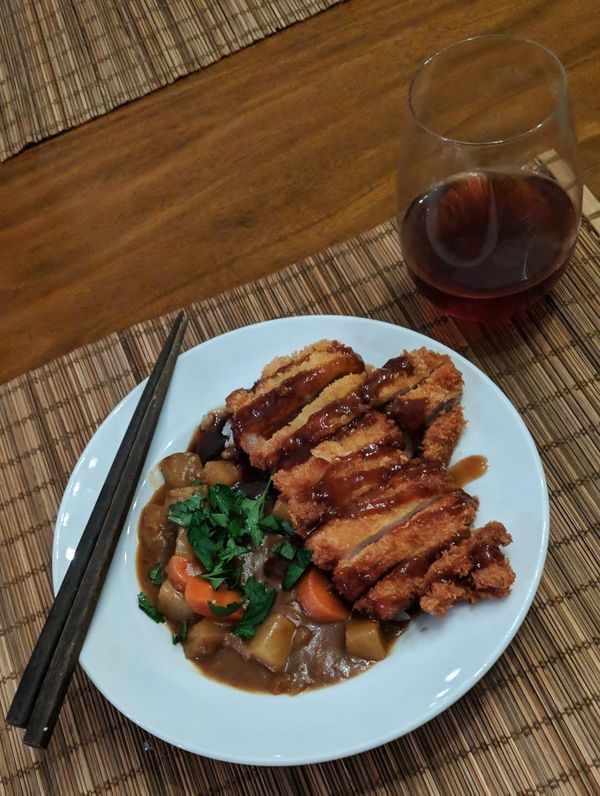 i used to make katsu curry all the time - it's the perfect comfort food. i'm not sure why i stopped! frying the cutlets can be kind of a pain,