so as you probably know, jk rowling has ruined her legacy with her persistent commitment to transphobia and general TERFiness. im not gonna link it here but she has been showing her whole entire ass on twitter so you can go look it up if you don't believe me.

fortunately there is more genre fiction than ever that includes the very reasonable assumption that a wholly imagined future or fantasy world could, i dunno, have trans people in it.

here are a few sf/f series that are either written by trans/gnc authors or have crafted universes that are affirming of trans/gnc identities. there are a lot more out there than this list, of course, but these are ones i have read, enjoyed, and recommend on their own merit as good stories.

note: i am cis so please reach out if anything on here should be removed, my twitter DMs are open. in my ignorance it is possible that something i perceived as affirming is actually problematic.

description: military space opera trilogy set in the far future. the hexarchate controls a huge proportion of known space, subjugating new worlds through 'sufficiently advanced technology indistinguishable from magic' which uses advanced mathematics, calendars, and ritual 'remembrances' to create extremely powerful weapons. a notorious war criminal, captured centuries ago and kept alive through unclear means, is revived in the body of a young military officer. battles ensue.
note: the author, yoon ha lee, is an asian-american trans man. in this series, there are both explicitly trans characters as well as characters who modify their bodies easily and often without much regard for gender markers.

description: series of four novellas and one full length novel. cyberpunk adventures of 'secunit,' an organic-cybernetic mercenary bot-for-hire with sentient artificial intelligence, who has hacked the code that keeps it in line, not to murder humans or anything but mostly because it likes to watch soap operas. this series is very funny.
note: including this here mostly because it rules in general, but also because of its casual inclusion of various genders across the human spectrum as well as agender sentient AIs that use it/its pronouns.

the book of the unnamed midwife, the book of etta, the book of flora
* i usually wouldn't link to amazon, but 47north, the publisher, is an amazon imprint

description: a pandemic wipes out almost all of the women on earth, and lingering effects of the virus make childbirth deadly for parent and child. in the wake of this, a nurse travels the remains of the usa disguised as a man, assisting the women she finds and seeking a place of safety. this series is explicitly trans-inclusive, but as a content warning, there is a fair amount of gendered violence against all women.
note: the author, meg elison, uses they/them pronouns. the book of etta introduces a community of trans women, and the protagonist of the book of flora is a trans woman. i haven't yet read the book of flora.

the fifth season, the obelisk gate, the stone sky

description: i honestly don't know how i could succinctly summarize this series without giving a bunch of stuff away. a seismically unstable world has led some humans to evolve an organ which can absorb and control seismic energy. these "orogenes" are, of course, enslaved and feared by the same population who relies on them to keep their cities from crumbling. in this setting, a woman seeks her family. i strongly feel that this trilogy is a generation-defining masterpiece.
note: there is one explicitly trans character (it is explained but only in passing, it is not the focus of this character's arc) and other world building details that imply the normalization of trans existence
honorable mentions: jemisin's inheritance trilogy contains a genderfluid deity who is also a love interest; her new novel the city we became has a minor character who is trans.

description: a woman from a traditional himba family becomes the first of her people to be invited to a prestigious galactic university. on her way there, she becomes entangled in a war between two alien cultures.
note: the second book, home, contains an explicitly trans minor character.

an anthology of speculative fiction by trans/gnc authors. some of these stories were very good and some didn't work for me. check out my pal brook's review for more a more in-depth look at this collection.

addendum: books i haven't read yet but probably also fit into this category and the authors are good

addendum 2: books that i wasn't super into but other people like very much so maybe check them out and decide for yourself

all the birds in the sky, charlie jane anders
the tensorate series (the black tides of heaven, the red threads of fortune, the descent of monsters, the ascent to godhood), jy yang

i'm throwing sourdough discard into everything these days in an attempt to avoid waste. it really shines as a supplement to quick breads that would not otherwise have time to develop any complex flavor. 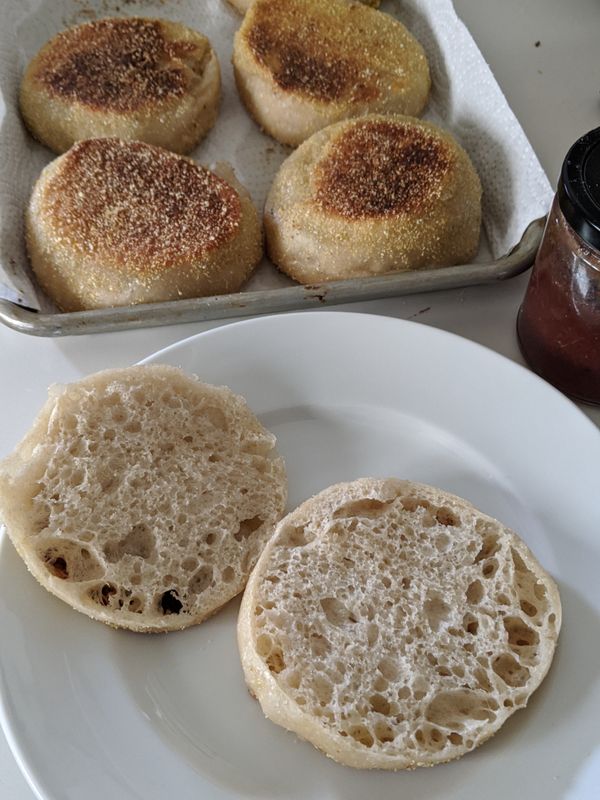 whoops, turns out online journals are not immune to my tendency to write three entries and abandon them i've been baking a lot more since the pandemic hit california. i